“Your travels sound a bit random!  Is there an order to where you go and when?”  asked one supporting church member after seeing our ministry slide 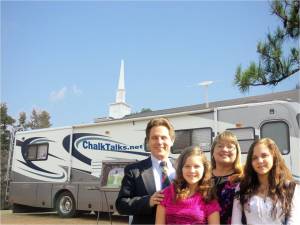 presentation.  The answer is a resounding, “Yes!  There is order and efficiency in our travels.”  The Lord opens the doors for our broader travel destinations, and we plan a year or more ahead of time to work out a reasonable route and schedule of events.  So, we are traveling and ministering all along the way, often having the privilege to stop at inspirational and educational venues between Chalk Talks.  For example, when we passed by The Ark Encounter last summer, we spent a day touring that amazing testimony of God’s Word.  We often take the time to travel the highways and byways of America, passing through small towns to see our American heritage, history, and many tributes to our military heroes.  We plan our travels to visit missionaries, spend time with pastors, fellowship with retired Christian servants, and generally share the Gospel with all those we meet along the way.  So, our family travels together in an effective, efficient way year-round for God’s Glory!  Thanks for your prayers as we set out on a 3-month journey of just such amazing ministry as I described above…to Alaska and back on a mission for Christ.

Haynes Family on a Mission

“Drawings Clearly Present the GOSPEL…Thank you” 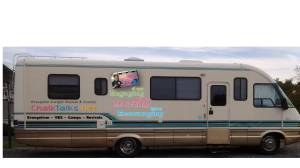 This Fall’s packed schedule of revival ministries has brought a common comment in several places, “Your drawings and Bible-Strong messages leave no room for doubt, they clearly present the Gospel–Thank YOU!”  Our family enjoys sharing God’s Good News of Jesus Christ, now with new-to-us 1993 RV provided by our Lord.

Thank you for support & prayers as we continue on Our Savior’s Gospel Trek!  This summer 30 souls came to Christ thru ministry in 2 Revivals, 4 Mission Churches, 3 Weeks of Youth Bible Camps, 2 Vacation Bible Schools, and special church services with Gospel Chalk Art.

Click on this image, and use it to recommend our ministry.  This is sound Bible teaching combined with the God-given talent of

I preach, my wife sings, one of our daughters helps us draw in some services, and we travel as a family to encourage families all over America!

Us Four and One More: CHALKIN’ USA Part 1

Us four and one more cuddly creature rolled across America this Summer.  Can this kind of faith ministry to open doors be done in the year of our Lord, two thousand and thirteen?  Sure, with the help of our Lord who promised His disciples the same provision and presence that He granted our family!

We pulled in the driveway on July 8th in our 1986 Toyota Dolphin, micro-mini RV, and looked at each other across the front seat and said, “It seems more like two days than two months!”  What a blessing to see God put together a ministry trip of 25 chalk-art services in places we had never met for people who, for the most part, had never seen chalk-art or met our family.  All along the 6850 mile trek, Good News Chalk Talks were well received with invitations to return for more ministries in the future.

One year before we left in May, 2013, a church-planter headed for Menominee, Michigan, in the Upper Peninsula on the western side of Lake Michigan, asked us to plan to come for his one-year anniversary on the last weekend in June of 2013.  So, our minds and prayers began on how God might use us in other places along the way.  Then, I received an e-mail from a New Mexico friend who said that a camp on the Navaho Nation reservation near Gallup, New Mexico, might enjoy our ministry for children’s camps in June of 2013.  We sent out information and received positive feedback, and the planning began.  My sister in Edmond, Oklahoma, said that she would tell pastors in that area about us.  This resulted in a pastor in Davenport, Oklahoma, inviting us to share sometime in June.  Some dear friends and former professor and wife in Louisville, Kentucky, said that their pastor was interested in us coming for ministry there as well.  Also, a missionary friend recommended us to Child Evangelism Fellowship missionaries reaching out in Chinese churches in Albuquerque, New Mexico, who eventually invited us to share in their dual-church Friday night service.  Appointments were coming in, so the trip planning began.  God’s amazing hand of leadership put the trip together, as we will explain later.  CLICK HERE TO SEE SLIDES from our travels and keep an eye out for the rest of the story!